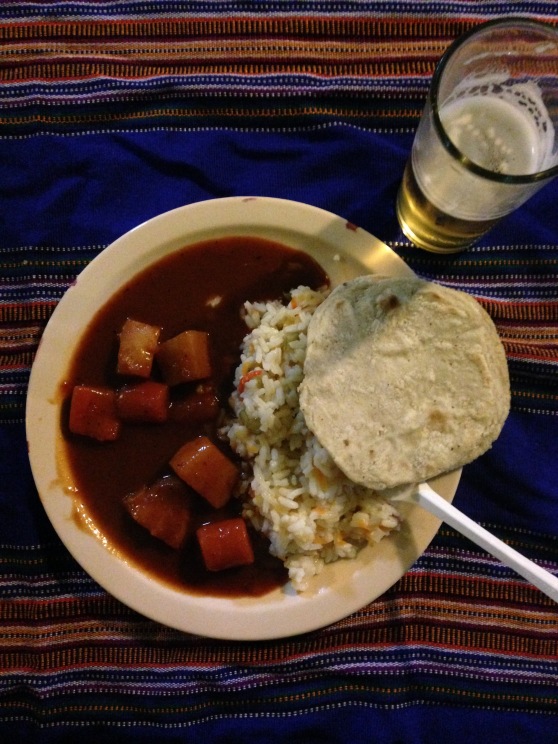 Our cooking classes at PLQ are taught by a friendly, explosive, and hilarious lady named Oti. She is friends with my host family, and has occasionally shown up at lunch time, bearing fruits or baked goods. She is well-liked by all, and, it seems to me, a bit of a gossipy yenta. She likes to tell stories in her incredibly fast Spanish, complete with imitations and reenactments. She turned to me after one of them and asked if I understood. (I had gotten maybe 30%.) She began the story again, in slower Spanish, but as the story progressed and she got excited, her Spanish continued to speed up. Maybe that time around I got 50%. Her upbeat attitude extends to her class, where she spends half an hour “while the chiles soak” telling us about her family drama and her visiting grandson and naughtily suggesting I need a Guatemalan boyfriend in addition to my American one. She’s an uplifting presence and I’m always glad when our paths cross. 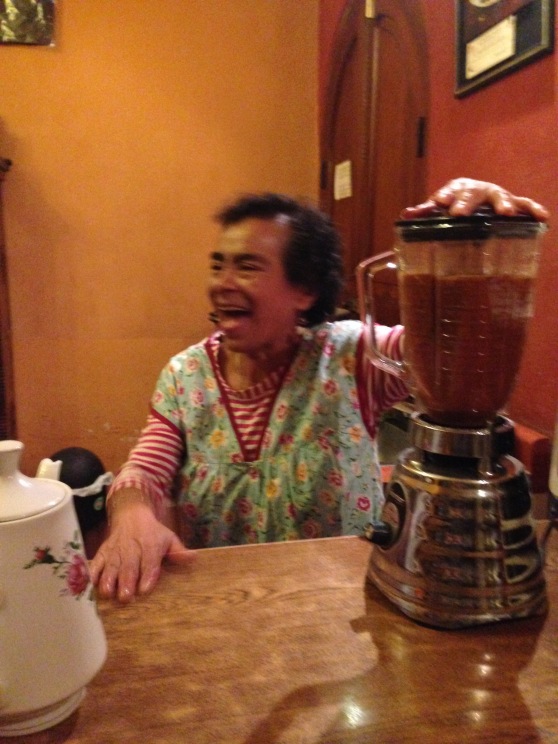 I’m daily thrilled by the generosity and kindness of the people I meet here. People are so willing to strike up a conversation! Yesterday, for example, I went on a trip to Laguna Chicabal — a sacred Mayan lake set in the crater of an old volcano. On the microbus on the way there, the guy next to us began to ask, in slow and measured Spanish, about where we were going, where we were staying, our jobs, language skills, etc. He was eager to figure out who the four gringa ladies in the back of the bus were and excited to tell us a bit about himself too. (I think he’s a traveling alternative medicine salesman who speaks Spanish and Mayan Mam but that job part was a bit tricky to understand.) Right before we got off, he asked if I had “the face” — we realized after a moment he meant FaceBOOK and wanted to be friends, but at that point it was too late to exchange any info (no sleep lost). I’ve had similar conversations with cafe employees, guys I’ve salsa danced with, and other people waiting for their tostadas at the stalls in the market. It’s a fun, informal way to practice Spanish, although in some cases I fear the conversation is initiated because they’re vying for that nonexistent, elusive position of Guatemalan boyfriend. Lo siento, amigos. 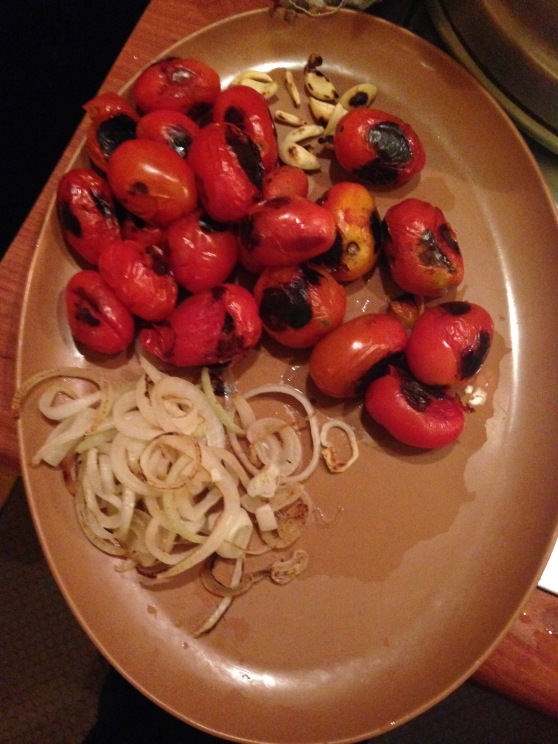 The recipe below is written exactly how Oti (with our ample slicing and dicing assistance) made it for our graduation dinner last week. No tweaks or improvements. It was certainly tasty — the sauce was good enough to eat with a spoon and I had a moment of annoyance that there were so many vegetarians this week and so not enough for seconds. It’s deep and musky and chile-heavy, with a slight spiciness cut by the tomatoes. I love that this is an extremely old and simple(ish) Mayan recipe. People have been making some form of quichon, which is only found in Quetzaltenango (a brief internet search showed surprisingly little internet evidence of this dish) for centuries (albeit with chicken). But I have some ideas about how I’ll update this recipe to give it just a bit more varied flavor — the chiles really do dominate — roasting the veggies instead of boiling, adding more garlic and perhaps a second type of chile, thickening the stew with something other than white bread mush, adding something green. But alas these will have to wait until the day of kitchen return. In the meantime, it will be vale la pena (worth it) to bring the smells and techniques of the Mayans into your kitchen, although I’m pretty sure they didn’t process white bread in a blender in the pre-Spaniard period. See Notes below recipe for ingredient tips.

one year ago: Buttermints and Mushroom, Olive, and Farro Stuffed Acorn Squash

4 carrots, peeled and cut into bite-sized chunks
6 small potatoes, peeled and in bite-sized chunks
1 or 2 guisquil (aka chayote – or use sweet potato or any other squash)
*5 dried paso chiles (aka ancho chile) – can find in a Mexican grocery store
6 cloves of garlic
1 large or 2 small onions, cut in strips
12 small plum tomatoes
*6 pimientos gordos (aka big pepper)
*8-ish slices of pan frances
salt

Boil the carrots, potatoes, and guisquil in ample water until tender. Strain and reserve the water. Now you have veggie broth!

Meanwhile, toast up your spices. We used a comal, or a thin tortilla grill that you put right on the flame of your stove, but a regular cast-iron or ribbed skillet would work just as well (and you could probably roast them in the oven too). Heat the pan up nice and high, and then toast the chiles, garlic, onion, tomatoes, and black pepper until they have char marks on all sides. Turn frequently. Depending on the size of your pan, do this in batches so you don’t crowd the pan. The black pepper balls only need a minute or so.

Next, soak the chiles in plenty of warm water until soft and easily pliable, about ten minutes. Remove and discard the seeds and inner membranes of the chiles. Tear each chile into 2-4 pieces. Meanwhile, tear bread into small pieces; put in a bowl with a bit of warm water. Mush with your fingers until it reaches a paste-like consistency. Only use enough water to make it like — the only comparison I can think of is matzah ball soup dough. Not so wet.

Next, we blend! First add to your blender the chiles and a bit of the veg broth from earlier. Blend until totally smooth. Add to boiled vegetables. Next, add the grilled onions, tomatoes, garlic, and black pepper with more broth. Blend until smooth and add to veggies. Finally, add the watery bread paste and blend til smooth, adding to veggies when done. Add more salt than you think you need and stir well.

Return vegetables to heat and bring to a boil. Simmer for about 10 minutes to thicken. Feel free to add more bread or more broth to reach your desired consistency. Our final product was like a thick Indian-style curry. Serve with tortillas and/or rice.

Chile paso is more commonly called the ancho chile in other parts of Central America. They’re dark brown in color and fairly large — more wide than skinny and long. As Oti says, “Solo pica un poco” — they’re a pretty mild pepper with a very small kick at the end. They’re commonly used throughout Mexico and could be easily found at a Mexican or international market.

Pimiento Gordo is a type of black pepper. These black orbs are slightly larger than our regular pimiento negro (normal black pepper) and have a slightly different flavor. I asked Oti if you could use regular black pepper and she basically said absolutely not, they give a completely different flavor to the final dish. But I don’t think the Mayans would care too much if you gave it a try…

Re pan francés: I was looking through a typical Guatemalan cookbook and was surprised many recipes included pan frances as a thickener for sauces. And indeed, Oti used a whole bag of day-old stale bread between this and the meaty-version (if you’re curious — replace the veggies with boiled chicken parts and voila). The breads she used were about three inches long and an inch wide, and very airy. This was not a dense delicious baguette, it was more akin to Wonder Bread. The bread lends no flavor to the dish, only texture. I’m going to experiment with other options when I have my kitchen back — I think corn starch, peanut butter, or a simple roux could all do the trick without all the unnecessary white bread starches. 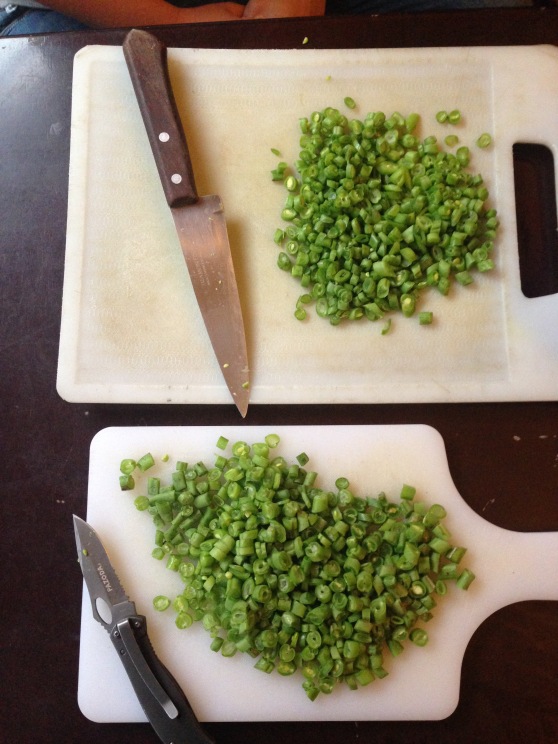 From the veggie-loaded rice we made — no recipe, just posting cause I’m impressed by our dicing skills with that sorry excuse for a knife.