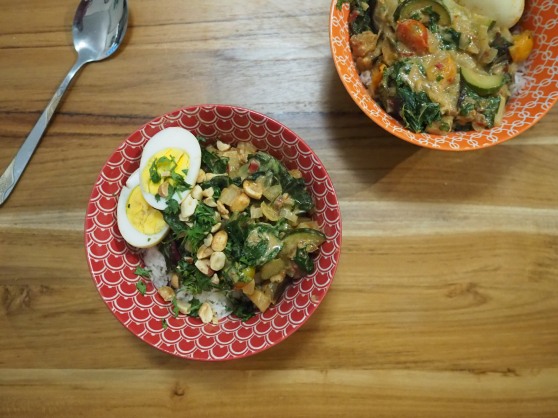 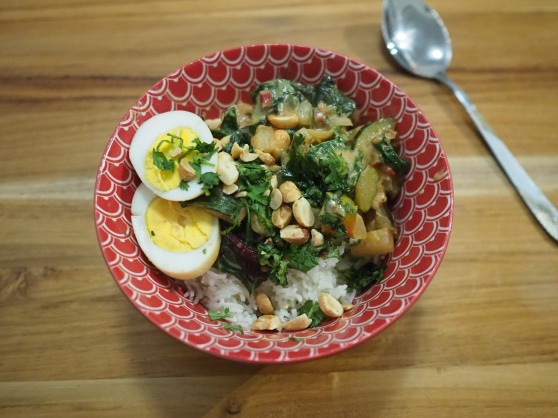 …named as such because it comes from everywhere and nowhere, according to Hanna. I love that description. And so fitting for my generation, who was born in a place, moves somewhere else for college, another place for a first job, and grad school after that. We’re all the combos of so many places. So cosmopolitan. 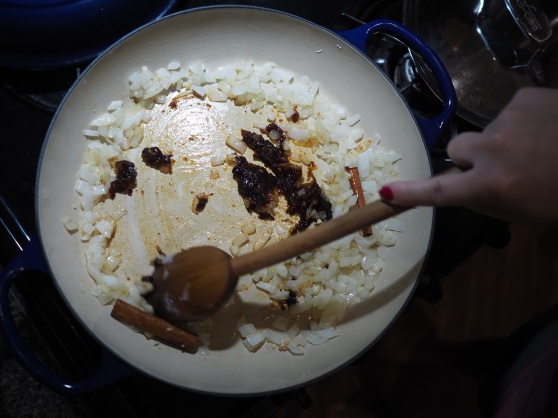 This was another “no-recipe” from the book (see the first one here), where Hanna walked us through her method of making a very basic and infinitely adaptable pot of dinner. The basics are: “Cook onion and other alliums. Add spices or spice paste. Add vegetables, maybe a protein. Add coconut milk and tomatoes and simmer. Add something a little sweet. Garnish and eat.” From that basic formula, which of course I know quite well but never feel I have the ability to create anew from, Daniel and I collaborated on this wonderful dinner. We also used up 5 (!!) CSA veggies, perfect before I went out of town to celebrate the bachelorette party of the lady who gave us the courage to experiment. 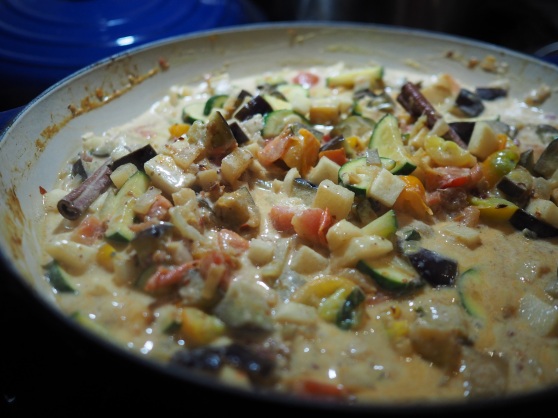 Be like Hanna, feel no need to stick to this recipe. Change the veggies, the proteins, the spices. Serve with rice, or not. Also, just be like Hanna in general, foraging berries on your hikes and not shying away from the vegetable temporary tattoos. By being fully, proudly yourself from an early age and following your whims. By leaning into unicorn beverages and their aftermath. Also by cultivating an amazing Girl Gang across the country who are so excited to wear neutral dresses in the mountains in a week. It was a pleasure to do bachelorettey things with you all. And cooking and eating together. We are a cosmopolitan group, hailing from all corners of the country and moments from your life. 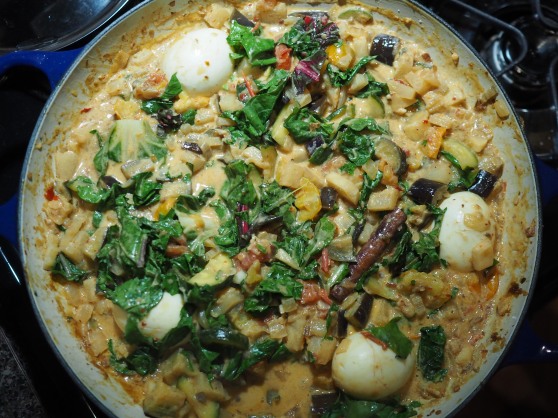 one and two years ago: who can be expected to cook in August in NYC?!
three years ago: just kidding, this is just a link to the amazing Sichuan-style eggplant I made for dinner tonight
four years ago: maple blueberry balsamic beets
five years ago: barbecue sweet potato nachos

Heat ghee (or butter or oil) in a big pan. Add onion and a big pinch of salt and cook over medium heat until they’re translucent and starting to brown. Add garlic and cook for another minute or so. Add cinnamon sticks and curry paste and saute for a minute or two, until paste smells a little roasty.

Add eggplant, kohlrabi, zucchini, and swiss chard stems and saute until veggies start to brown. (Kohlrabi will remain a little crunchy in final dish — it’s quite pleasant, but if you’d like it softer, roast first. Or use something else!) Once veggies brown a bit, add tomatoes and cook until they start releasing their juices. Next add coconut milk and sambal oelek, and give it a good stir. Add some broth or water if it seems like it needs more liquid. Peel and score your hard boiled eggs, and nestle into the sauce. Simmer, with lid on, until veggies are tender.

When everything is cooked, take the lid off and add your greens. They will wilt very quickly.

Season to taste — at this point you could add salt, sugar, lime juice, hot sauce according to your preference. Remove cinnamon sticks. Cut eggs in half. Serve over rice, with lots of cilantro and crushed peanuts.

Hi again! Posting two days in a row, this might be a first. Oh boy. I’m just here to say that you can do the exact same thing I did with yesterday’s salmon to today’s sweet potatoes. Exact. same. sauce.!! And it’s REALLY GOOD. And this way it’s vegan. I served these sweet potatoes on buttery white rice with an egg fried in sesame oil (not vegan). All drizzled with sriracha. One of my better thrown together dinners in memory. 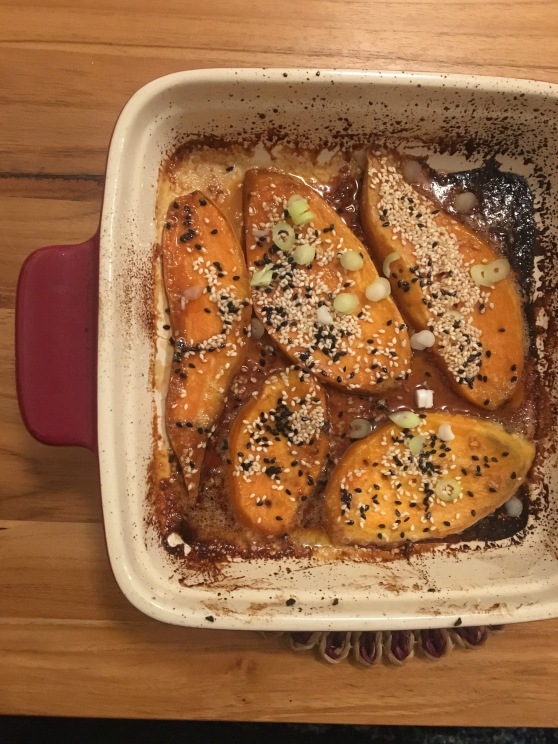 Preheat oven to 450F. Find a baking dish that will fit your sweet potato slices in basically a single layer. I halved the recipe and did an 8-inch square dish. Put a little coconut oil on the dish and arrange your potatoes. Mix together maple syrup, soy sauce, sesame oil, and garlic in a measuring cup, then pour over potatoes to coat. Cook for about 20 minutes. Flip sweet potatoes and sprinkle with sesame seeds. Cook for another 20 minutes, until sauce is bubbling and thick, and sweet potatoes are coated and tender. 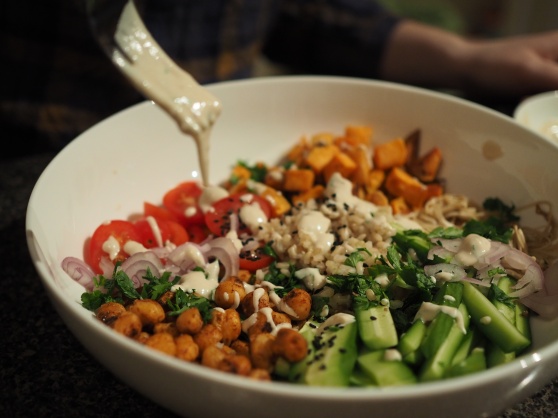 Daniel was supposed to make a chicken recipe a week while I was in Russia (so, 5 recipes total). He was going to blog them and it was going to be great. Well, this site still has 0 chicken recipes, so you can see how well that went. He did make one recipe but took no pictures of it, so here we remain. Sigh. 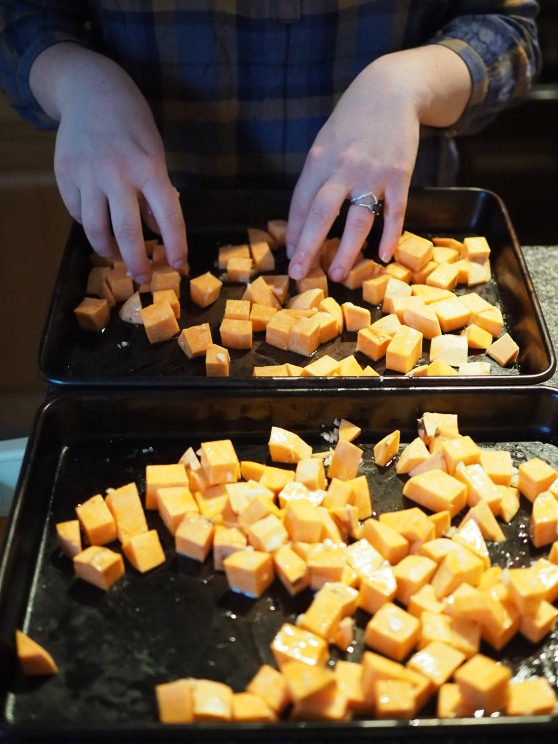 I can’t blame him too much. Cooking requires time and love and follow-through, which I am only sometimes in the mood for. Tonight I was in the mood for it. My lovely friend Caroline gave me this recipe and said it seemed like something I would really like. Accurate, as I have made many versions of meals similar to this. I hope you’ll forgive me, Care, for adding extra things and making this far less simple than you intended. I had the time tonight. Recipes are for breaking, right? I veered from the recipe by pan roasting the chickpeas a bit and adding spices (I don’t like them straight out of the can), and adding brown rice, some crunchy veggies, and sesame seeds. To make it a “buddha bowl” I put everything in a giganto bowl that appeared in the mail while I was in Russia. (Did someone send us this? I think they got our registry mixed up with someone else’s but … now I have a great giant bowl and I love it.) It’s as full and rounded as Buddha’s belly. 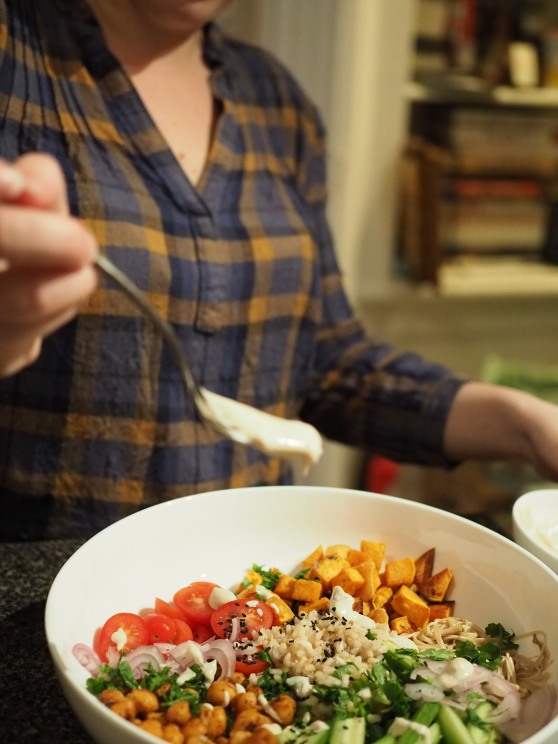 There’s another recipe on this site with very similar ingredients, just combined slightly differently (and kale would be great here too). I like this version more for a quick weeknight meal – you don’t have to wait as long for the sweet potatoes to cook, since they’re cut into small cubes. Also its called a Buddha bowl, so it’s automatically healthy 🙂 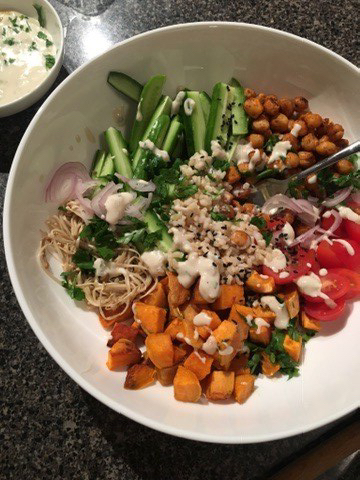 Meals like this are the best after traveling for a while. This bowl was my post-Guatemala craving and mmm here’s my savory granola I invented after our Jordan trip. We did have a kitchen in Russia, so I wasn’t forced (ha) to eat 3 meals out a day, but it wasn’t so easy to cook. We couldn’t find some staples — tortillas, coconut milk, black pepper, chickpeas, most leafy vegetables, popcorn. The house we were in had one LOUSY glass cutting board, no can opener, and really abysmal knives. I managed roast cauliflower, a mushroom pasta, and many eggs, but that was about it. Feels good to make food exactly as I want it, then eat it. 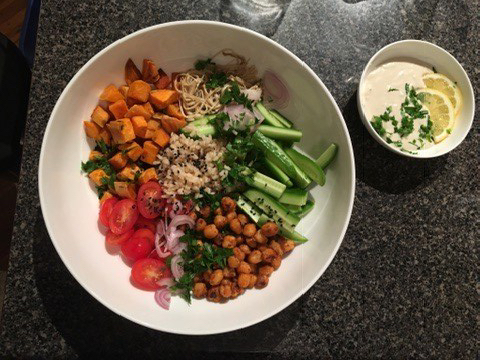 one year ago: anyone else currently reading The Power? I can’t decide if I like it or not…
two years ago: eggplant salad and goat cheese sandwiches
three years ago: herby sunchoke gorgonzola salad
four years ago: grilled pineapple and baked bean tacos

inspired by my friend Caroline

Combine everything on a roasting tray or two (keep veggies in a single layer!), and bake at 425 for 30ish minutes, mixing halfway through roasting.

Heat a medium saute pan and add a bit of coconut oil. Add chickpeas and spices and cook over highish heat for about 5 minutes, until chickpeas are charred and smell awesome. Stir frequently so they char all over.

Tahini dressing
1 clove garlic, minced
3ish tablespoons tahini (I just scraped out the rest of my jar, so this is a rough estimate)
Juice from ½ a juicy lemon
1 tablespoonish olive oil
Small dollop of honey (oops I guess this negates the veganness – can use maple syrup instead)
s&p
Warm water

Combine everything except warm water in a measuring cup, and mix with a fork. Add water a bit at a time until desired consistency is reached.

It’s always the small things you miss most when traveling. Mealtime independence (and people always respond “poor you, having to eat out three times a day”. But REALLY people, I like scrambling my own eggs and eating cold leftovers for breakfast sometimes!). Having reliable wifi in the bathroom so I can check Facebook while…brushing my teeth. Being able to flush toilet paper directly down the pipes instead of depositing it in the trashcan next to you. Cheese. 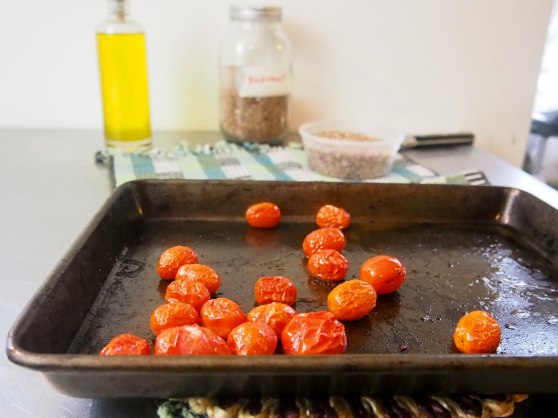 Since my NYC return, I’ve met up with many friends who have greeted me with, “Looks like you ate so well on your trip!” I look at them, confused, wondering where they gleaned this information. Because, yes, I literally don’t know how to Not eat well (and by well right now I really just mean plentifully), but I wouldn’t say my time in Guatemala was the epitome of this. They respond that my Instagram food pictures looked amazing (which I just attribute to the beautiful woven tablecloths that adorned every table), what great vegetarian options there were, etc. What they don’t know is that Every Meal I Didn’t Post on Instagram consisted of corn tortillas, overscrambled eggs, mayo-y boiled vegetables, and bean mush. Hence my excitement in returning to the world of Extreme Bowl Culture.

And hence this very simple lunch I’ve been dreaming about since approximately one week into my trip, or you know, since before Thanksgiving. This meal riffs on a snack I used to assemble for lunch during long shifts at Bakeri, comprised of easy ingredients we always had prepped. I bought my kasha at a Polish deli for very cheap, but I’m sure you can find it in the bulk section at any health store. Kasha is a fancy name for toasted buckwheat, which it’s a bit nuttier than the untoasted variety. Kasha is brown; if it hasn’t been toasted yet it will be green. You can assemble everything beforehand; the salad is just as good warm as it is at room temp. Feel free to add parmesan or feta to de-veganize this. A handful of baby salad greens would also be a nice addition. 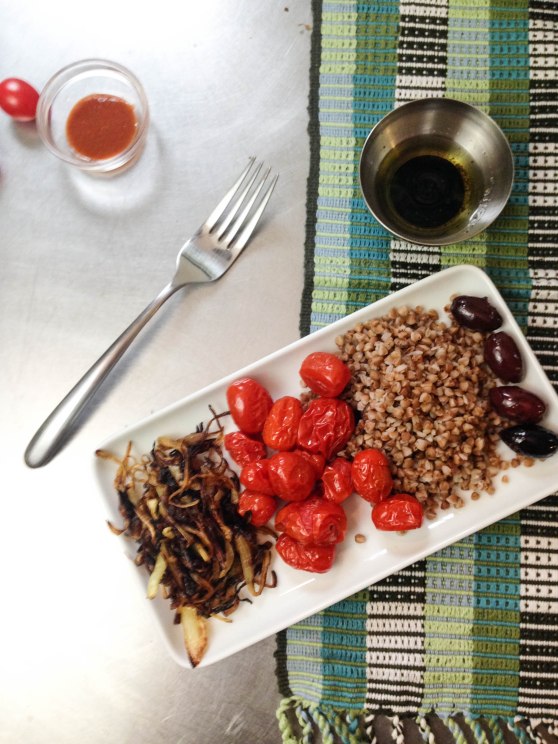 one year ago: hot honey pizza with roasted broccoli and red onion and bengali egg curry

To make buckwheat: Bring water to a boil. Add kasha. Simmer for about 10 minutes, or until tender. Strain.

To roast tomatoes: Preheat oven to 400 degrees. Place tomatoes on a baking pan and cover with a healthy drizzle of olive oil, plus s&p. Roast for 12 minutes, stirring halfway through. Tomatoes will be crinkly, puckered, juicy, and blistered when done. Mmm.

To “caramelize” onion: I am no expert on this, as I always get impatient and try to turn up the heat. But do as I say, not as I do: Heat enough olive oil to coat the bottom of a large skillet on medium heat. Add onions and a big pinch of salt. Cook on medium-low at the highest, stirring occasionally, for EVER, or until tender and sweet. Or don’t, turn the heat up, and embrace the charred onion bits, just like me. 🙂

To assemble: Mix together about ½ cup cooked kasha (or more) (or less), cooked tomatoes, caramelized onions, and olives in a BOWL (or a platter first cause it’s pretty). Mix together about 1 tablespoon olive oil and the balsamic vinegar; season with salt and pepper. Pour dressing over salad. Add hot sauce if you want a kick. Commence eating.