The day before New Year’s Eve, my co-worker told me she had so much prep cooking to do that night. Not someone I had pegged to be a big cook, I asked what all she needed to do. She told me that every year she has a tradition of making black-eyed peas, greens, and noodles (from her Southern and Chinese heritage) for the new year. I love this idea of canonized end of the year traditions, but the furthest I ever get is rereading last year’s list of goals and usually rewriting many of the same ones. (“Restring guitar”, “get better at yoga”, and “think about grad school” have all graced each list from the past three years…) Inspired by her lead, I decided to play around with these simple ingredients.

I’d heard of the black-eyed pea tradition before; supposedly it is lucky to eat them on New Year’s Day because the spotted peas look like coins (and who wouldn’t want a little more of that in the coming year). According to this article, looks like the Jews started this tradition over 1500 years ago, eating the peas on Rosh Hashanah. (Don’t know if I buy that, though.) It may have come to America in the early 1700s with the Sephardic Jews or (seemingly more likely) as part of the slave route; regardless, it has evolved into a classic Southern soul food tradition. 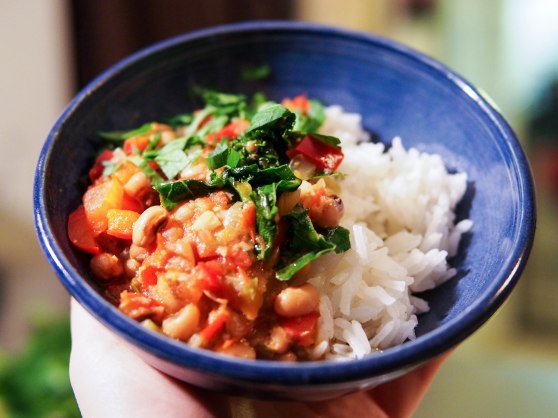 I’ve also heard of noodles being lucky — I’ve repeatedly been tempted by the “longevity noodle” dish at Biang! that looks like a whole platter of noodles but is in fact just one very long one that comes with a pair of scissors. Long noodles represent a long life, as long as you slurp them up in one mouthful and don’t chop them off partway. Makes sense to start a new year with an ode to long life.

And the greens I’m a little confused about. I think they also represent wealth (greens=the color of money?), but for me, they will represent a pledge to eat healthfully in the coming year. Combine these three together, and I give you… quick and simple black-eyed pea stew! Perfect for New Year’s, or really any time you need a quick meal. The peas are traditionally cooked with some sort of pig product; I added smoked paprika and liquid smoke to replicate some of that flavor. (Although Daniel did put bacon on top of his bowl and was pretty happy about it.) To be honest, we both enjoyed this more with rice, but if you want the lucky triple whammy, spaghetti away! Nothing like a symbolic meal to start this uncertain year off on the right foot.

one year ago: …I was in Guatemala and didn’t update the blog, BUT let me take this moment to let you know I JUST updated my Recipes page! check it out!
two years ago: Bengali egg curry

Heat olive oil in a medium large pot over medium heat. Add onion, pepper, celery, and jalapeño and sauté for 6-8 minutes, or until veggies have softened and onion has become translucent. Add garlic, smoked paprika, thyme, and a bit of salt and pepper and cook for another 2-3 minutes, until garlic is fragrant and veggies are evenly coated in spice mixture.

Next, add in the chopped tomatoes and their juices, broth, black-eyed peas and the liquid in the can, and the liquid smoke, if using. Add a bunch of salt here too. Simmer for about 20 minutes, until peas soften and most of the liquid evaporates.

Right before serving, still with pot on medium, add in your kale and stir until it wilts, about 3-5 minutes. Serve with rice or spaghetti and a sprinkle of fresh parsley.