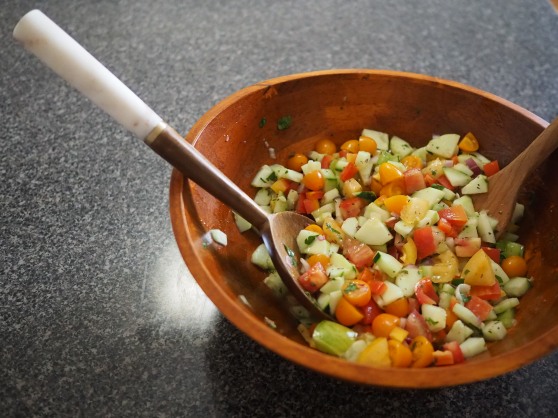 This salad encompasses many of my favorite things.

1. My CSA. Yes yes, I know, I have waxed not-so-eloquently on here before about the joy I get from receiving a local fruit and veggie haul each week. This year’s CSA, in our new neighborhood, is even more bountiful than previous versions. We have been loving their tomato varieties, pepper assortments, greens, corn, beans, squashes, herbs, melons, and more all summer. This salad, though this time around not fully comprised of CSA goodies, is indicative of the type of salads I’ve been loving all summer. (team #nolettuceinsalads) If you let me ramble about vegetables, I will. 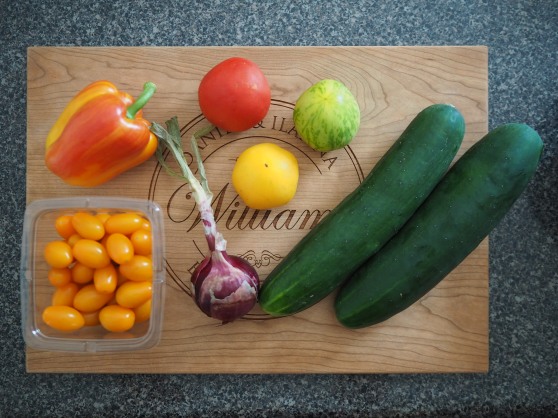 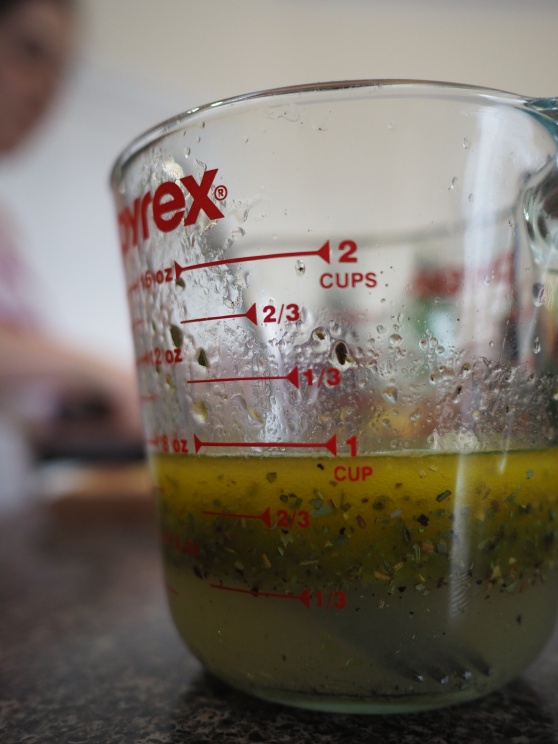 2. My obsession with Yotam Ottolenghi. I have also droned on on here ad nauseam about my adoration of celebrity chef Ottolenghi. I have 3 of his cookbooks, which I regularly look through and which often end up open in the middle of our living room. I follow him and his hashtag on Instagram. We saw him talk a year ago-ish, which was a highlight of the year. He has a basic chopped tomato salad recipe in Simple, where he says “The addition of tahini paste to a familiar tomato and cucumber salad is a revelation.” Okay, hyperbolic much, Mr. Ottolenghi? But, uh, he’s right. It’s so good. I added tahini to this one and don’t regret a thing. 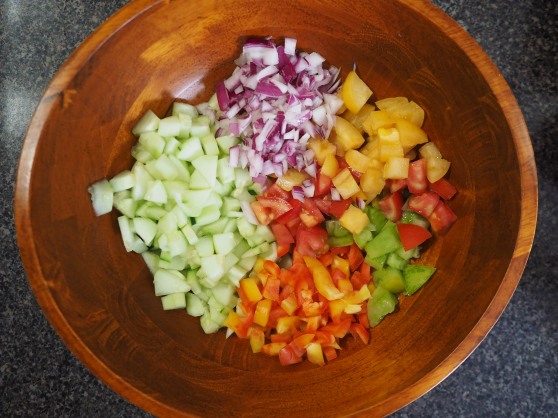 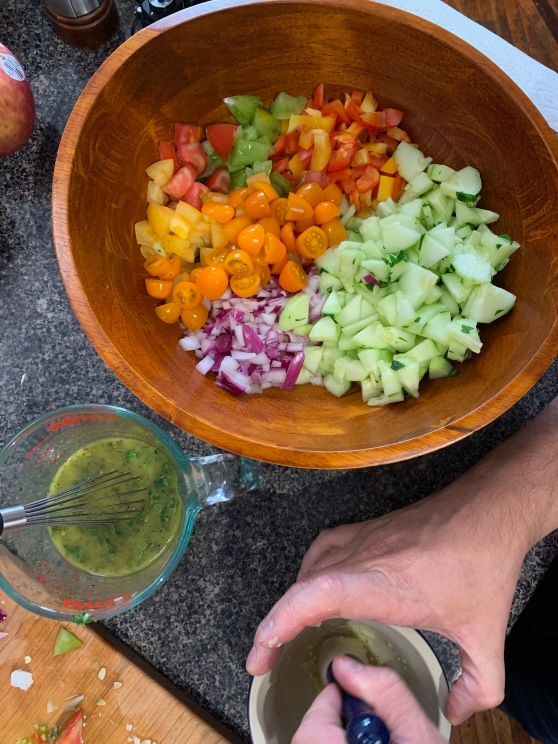 3. New shiny technology. This if my first post written on my shiny new computer! I haven’t had my own new computer since at least 2012, and that one unfortunately met a quick demise a year or so later by cup of water 😦 Since then, I’ve been cycling through Daniel’s hand-me-downs. It feels so nice to have my own, brand new computer to set up and get to know. Hopefully it lasts for a good long while because apple has enough money. (I also just got a new phone, so I’m enjoying fast internet connection and RAM speeds (am I using that word right?) all over the place.) 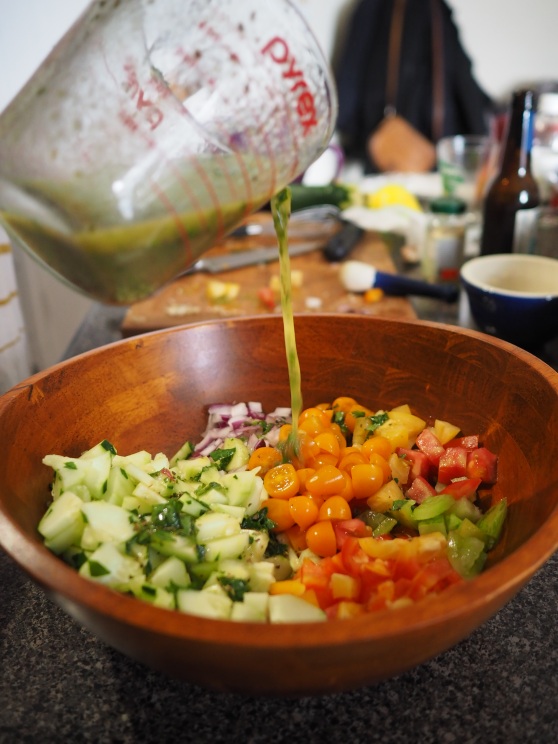 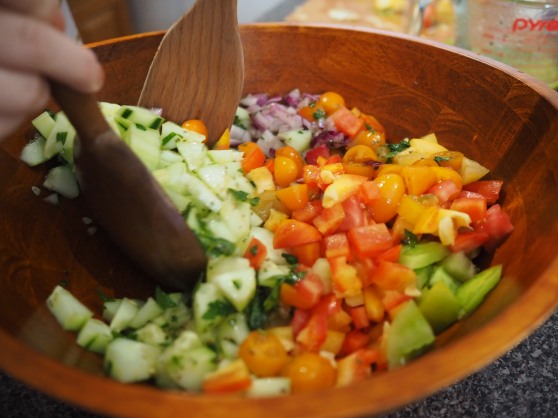 4. My grandma! Love you! Truly one of my favorite cooks, who always knows how to bring community together through food and care. I have had this salad, or a variation, at a hundred casual dinners and gatherings. It’s so homey, yet the dressing is bracing and assertive. I wouldn’t have expected it’s a mixture of lemon juice and regular old white vinegar. But it’s going to be a go-to from here on out. Glad to have this version in my repertoire. 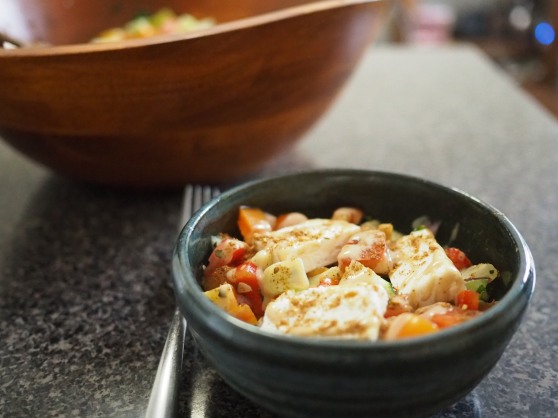 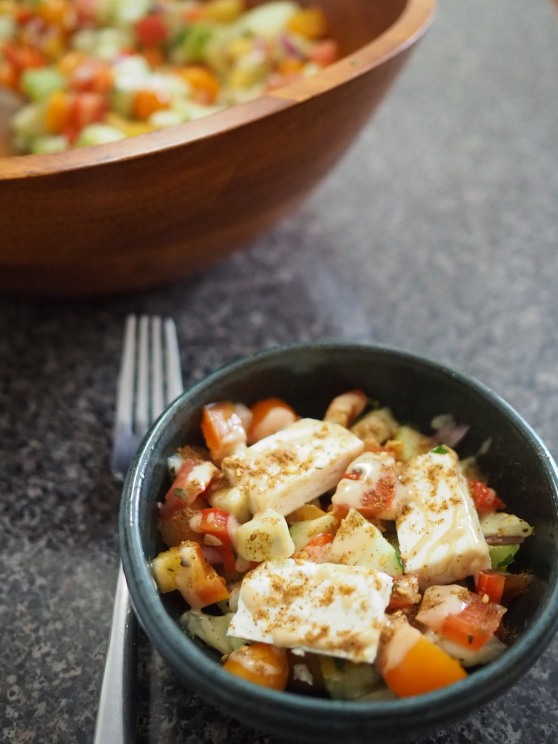 one and two years ago: nothing of note, but I made this cheesy zucchini orzo from half baked harvest for dinner the other night and dang that was a great dinner
three years ago: chopped summer salad with feta, mint, and lime (made this for dinner a couple nights ago)
four years ago: roasted green pepper and smoked gouda pasta
five years ago: roasted radish and pepper pizza and caramelized fennel with dill and goat cheese (another Ottolenghi-inspired dish!)

A la my grandma, plus Ottolenghi

Put all salad veggies in a big bowl.

In a small bowl or measuring cup, combine all dressing ingredients thoroughly with a whisk. Taste and adjust as needed.

Add dressing to salad veggies and toss toss toss. Now this is a perfect side dish! To bulk it up a bit:

To make it extra
Add feta. Top with za’atar and a swirl of tahini.
OR boil up about a cup of orzo. Add to veggies. Lemony Israeli Pasta Salad!
OR both!