Sunchokes (also known as Jerusalem artichokes), when roasted in a pool of olive oil and liberally decorated with salt, make my heart do strange things. I just can’t get enough of the their nutty artichokey potato-ness, so satisfying and downright earthy. I pitter patter at their smooth savory finish, and will fight you for the caramelized edges. Ugh, I could just stand by the oven and eat a whole tray of those scintillating little stunners. (Wait, I have. But I don’t recommend it — those dudes have some pretty tough-to-break-down skins if ya get what I mean.) So, as a lesson in moderation, mix them with a bunch of other stuff and make it last longer than one stove-side binge session. Hence, salad. I’m SO good at moderation.

Also I don’t think I used actual gorgonzola in this salad. It was just a generic (read: cheap) bleu (blue? blew?) cheese. So, substitute away as necessary. And let’s take a moment for a General Announcement about substitutions. This is a Salad. As such, you can’t f up “the recipe” too badly. (We used to joke in college that as long as you had a big assortment of stuff in a bowl, it counted as salad. Which led the way to cereal salad, spaghetti salad, cookie salad, etc. We had the right idea.) Because it’s not a real recipe, like for cake, which won’t taste like cake if you leave something out. It’s a suggestion. It’s Salad. It will literally and definitively still be salad no matter what you add or don’t add. So use whatever stinking cheese you want. (Or don’t use it at all, you rebel, you.) End of General Announcement. 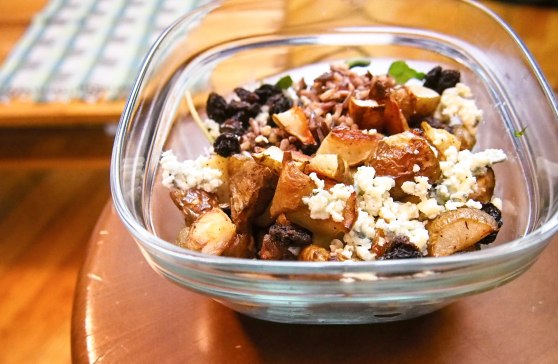 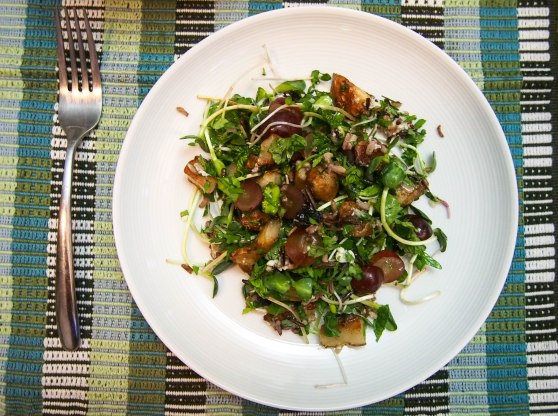 But do let me suggest this specific mix of ingredients cause dang they’re good together.

one year ago: roasted eggplant and pepper soup with orzo and homemade baked bean and pineapple tacos

Preheat oven to 400 degrees. Combine sunchokes and olive oil on a rimmed baking sheet; add a generous amount of salt and pepper. Roast for about half an hour, turning occasionally, until browned, softened, and tantalizing.

Let sunchokes cool down while you mix all remaining ingredients in a big bowl. Add sunchokes. Top with a drizzle of olive oil and serve.