Last week Daniel and I tried this nifty thing called…making all our food all week.

Simple as it sounds, you must remember the plethora of distractions that make this quite a challenge. Just, for example, think about:

-our Friday morning bagel sandwich ritual
-Tuesday evening post-salsa beers and pretzels at the German place down the road
-a night of Thai take-out and Kimmy Schmidt binging after working two jobs in a day
-grabbing a slice of pizza or deli sandwich in between said two jobs
-that hunger that arrives around 7 pm, when you’re already out with friends and contemplating a movie. To see a movie and arrive home starving hours later? Or not to see the movie? Or just break the deal all together? 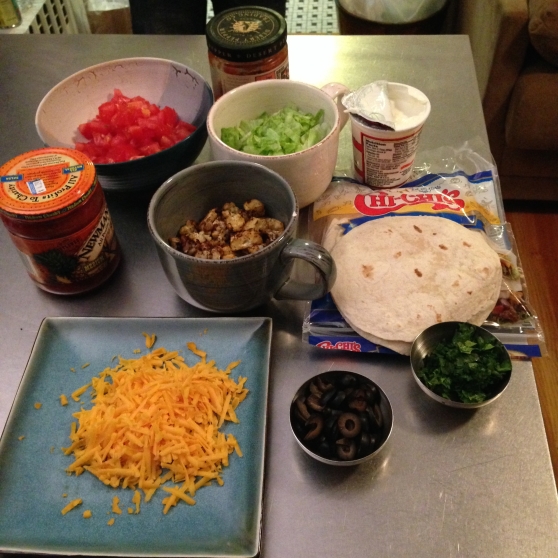 But we did some major grocery shoppings and conquered the odds and made it the whole week! And had some really freaking delicious food. Some real meals and leftovers (coconut rice (recipe below!) and sweet potato chickpea curry, homemade pizza) and some small thingers that can easily be turned into a meal (big batch of granola, not-quite-big-enough batch of hummus).

That is, until Friday evening, when somebody had one beer too many (…that means 2 total, ps) and decided the only thing they could possibly eat that night was tofu pad see yu. (That person was me.) Oh well, close enough.

We really meant to continue through the weekend but then the weekend EXPLODED. On Saturday I worked at the bakery in the morning, then stilt walked at the Tribeca Film Festival Children’s Street Fair for 2 ½ hours, and then had a salsa performance. And Sunday was more bakery work, a trip to the NYC Hot sauce expo, reconnecting with old friends and visiting the Brooklyn Morbid Anatomy Museum and then greedily and excitedly downing a mediocre but fully deserved and stupendously salty mushroom burrito.

from Plenty by Ottolenghi

Previously pictured on the blog with sambal-y okra in this post, with recipe for caramelized fennel with goat cheese!
Also would be super-delicious with Bengali egg curry.

1 ⅔ c white basmati rice
¾ c full-fat coconut milk (use the other half of the can for curry!)
1 ½ c water
½ t salt
6 thin slices of peeled fresh ginger

Rinse rice with lots of (cold) water and drain well. Put in a medium-small saucepan and toast rice over medium heat for a minute or two–just until it starts to smell nutty. Add all other ingredients, stir a bit, and bring to a boil. Cove, turn down heat, and simmer for 12 minutes. Remove from heat but keep pot covered for 10 minutes. Fluff with a fork and serve immediately!

Hard at work at the office, eating leftovers and organizing costumes for the weekend’s stilt-walking activities 😉

The best thing that came out of my seder a couple weeks ago was not, amazingly, the secret to make gefilte fish taste palatable or the revelation that my hyper-logical-atheist boyfriend would embrace old Jewish customs “just because that’s how they are,” but something much more seemingly mundane. 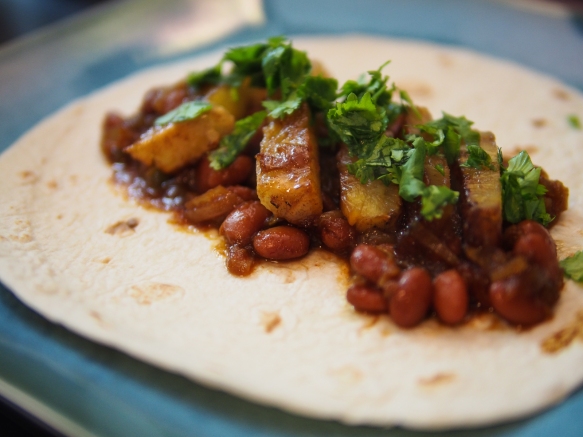 I’m talking, of course, about grilled pineapples (a natural seder conversation topic). After our requisite glasses of wine and long-winded discussions about The Prince of Egypt vs. the Rugrats Passover episode, the conversation led to lunches, and specifically grilled pineapple lunches. The idea took hold and led to this magnificent taco-burrito-wrap-meatless-Hawaiian-pizza hybrid that would disappoint Mexicans and Texans and Hawaiians of all sorts but makes this Jew oh so happy.

This was my first foray into homemade baked beans! Despite using the wrong kind of bean, the flavor in these [beanie] babies was out of control delicious. And mixed with the pineapple? ohmygod make it now!!~*!!!^!! Even if it’s sorta ugly. 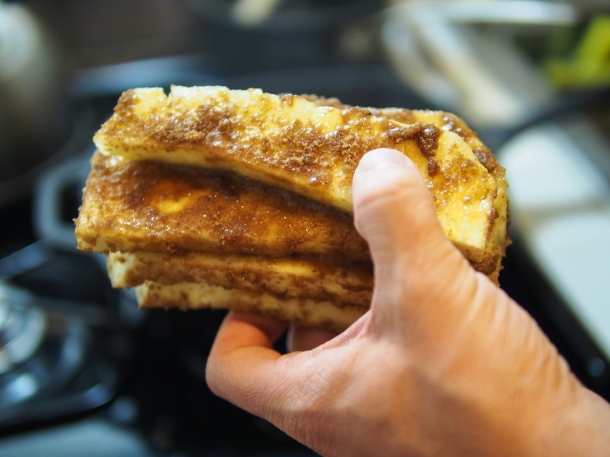 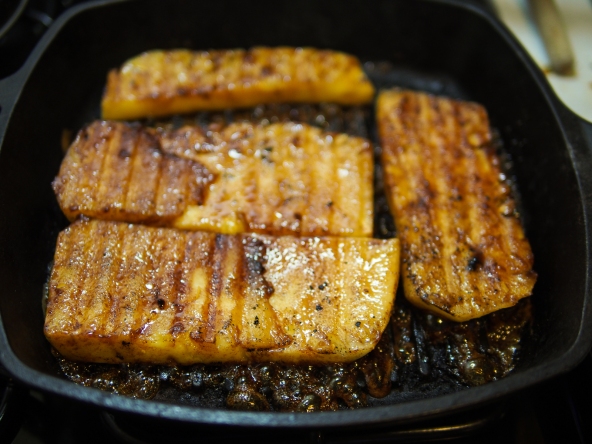 (And let it be known Daniel added grilled ham-steak (is that a thing?) to his and then ate three, so… if that’s your sorta thing, go [hog] wild.)

1 batch baked beans (recipe below) or cheat and use a can
smallish flour tortillas (or corn if GF)
cilantro, chopped
½ a pineapple
smoked sea salt, chili powder, olive oil
OR
brown sugar, cinnamon, salt, and butter
(depends on your mood)

Cook/warm up baked beans according to how much time you’re willing to invest tonight. (MAKE the ones below. PEER PRESSURE! THEY’RE SO GOOD!)

Heat a grill pan so it’s nice and smoky (or, ya know, a grill, if you have that sorta thing). Cut top and bottom off pineapple, and then carefully slice off the skin. Cut into ½-inch slices, careful to avoid the core. Then, you have a choice! For smoky-spicy pineapple (which I thought went better with the beans), rub both sides with olive oil, smoked sea salt, and chili powder. Or, for brown sugar caramelized pineapple, mix together about ¼ c brown sugar with 1 t cinnamon and a sprinkle of salt, and rub it on both sides. For either version, grill about 2-4 minutes on each side, until you see nice grill marks and the pineapple has darkened on the outside and softened in the inside. (For sweet version, you can mix the leftover sugar/cinnamon mixture with a bit of melted butter and baste pineapple as it grills for some added zing.)

The make your tacos! Char your tortilla if desired, and fill with grilled pineapple slices, baked beans, and plenty of fresh cilantro. Repeat. Go into food coma.

In an oven-safe Dutch oven, warm olive oil over medium heat. Add onion, sauté for about 4 minutes. Add bell pepper and continue sautéing until onion is translucent and peppers are soft, about 4 more minutes.

Add everything else! Bring pot to a simmer; then cover and stick in oven. Cook for as long as you feel like it (more time = more flavor), but I would go for at least 45 minutes (I think I did mine for an hour). 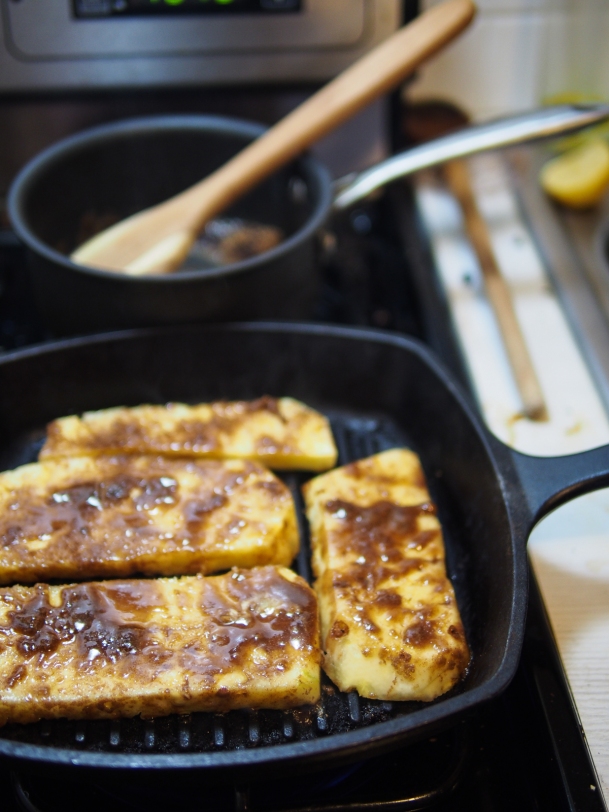 As soon as that well-deserved mythical short-lived apparition called Spring in New York City appears, I notice my fellow city-dwellers in what can only be called trendy clothes. Gone are the layers of coats, grandma hats, tights-under-leggings-under-jeans, and here is…fashion. As someone not particularly privy to this world of fashion, due to a combination of genes, money, and just not caring very much, I still feel the pull to present myself as, well, presentable. And instead of rushing to a thrift shop or *gasp* an actual store with regulated price tags and employees who are really freaking good at folding, I head to the strange and wonderful world of the back of my closet. 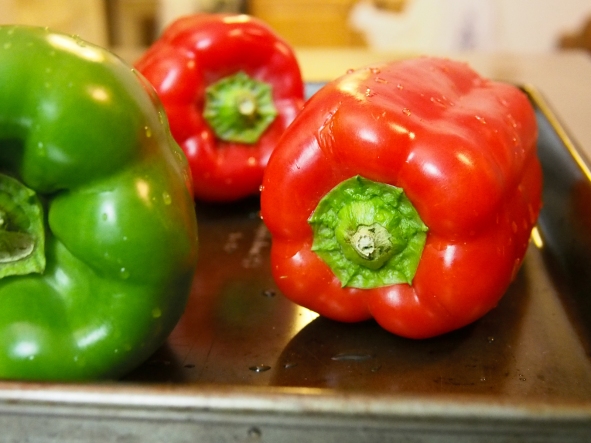 And so this is how, year after year, I find myself wearing this same dumb light purple, zip-up, three-quarters sleeved, stretchy-fabric abomination. Originally purchased circa 2005 at Marshalls/TJMaxx, the shirt has since made an appearance in my senior yearbook photo and whenever I try something high-waisted. 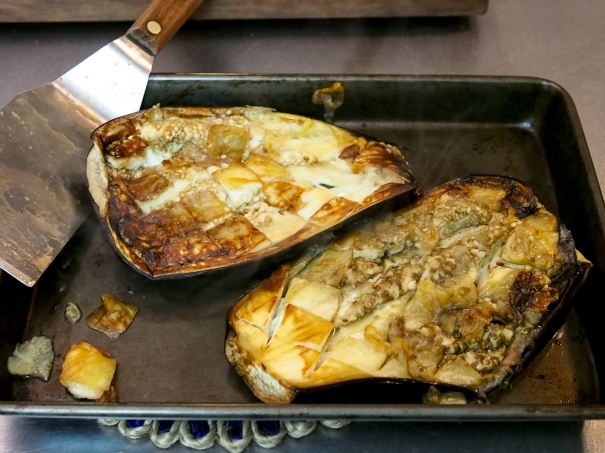 Today is one of those days. Today I feel 10 years younger, stressing out about my geometry test and writing notes to the cute boys who would play poker during class as our batty teacher Mrs. Corbasero looked the other way and I memorized lines for my Starring Role of the Moment, and I angstily daydreamed about moving to New York City and Living the Life, which probably involved frosting for breakfast and a movie star boyfriend. Well, 10 year ago me, frosting for breakfast leads to expensive dental appointments and actors (tend to) suck as boyfriends. Try soup instead. (And programmer-climber-photographers.)

leftover vegetable-skin detritus has taken over the table.

This soup is goooood. For dinner or breakfast or whenever. It tastes freaking delicious and doesn’t give a shit about your 15-year-old (or 25-year-old) insecurities. Also I didn’t follow a recipe, so who needs math now, Mrs. Corbasero?

Meanwhile, heat a large pot with 1 T olive oil to medium-low heat. Add onions and a big t salt and sauté for about 10 minutes. Add carrots; cook for another 10 minutes. Add sherry, scraping up any browned bits that have stuck to the pot. Keep on a low flame until ready to use.

In small saucepan, cook orzo according to package directions. Drain and set aside.

Once all parts are ready, it’s blender time! Combine: eggplant, roasted peppers (reserving one to give the soup some texture), half of roasted tomatoes, most of onion-carrot mixture, 1.5 c broth, and parsley. Puree until smooth, adding extra broth and s&p as needed.